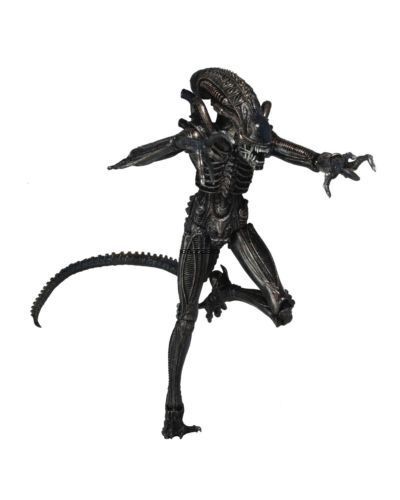 Alien and AVP collectibles include movie memorabilia, comic books, action figures, and other toys. You can find these and other items that represent a crossover between the Aliens and AVP universes and others such as Judge Dredd.

What are Alien and AVP?

"Alien" is a 1979 film by Ridley Scott that starred Sigourney Weaver as Ripley. The success of this film launched an Aliens series that included film sequels, books, comic books, video games, and more. "Predator" is a 1987 film by John McTiernan that starred Arnold Schwarzenegger as Dutch. In "Predator 2", a Xenomorph skull is seen in a trophy case aboard a Predator ship. This small nod planted the seed for the Alien vs. Predator universe, which is often abbreviated as AVP. The AVP mythology has given rise to crossover:

What action figures and models are there?

Aliens vs. Predator figures are available in two grades: toy and collector. The toys are usually adjustable so they can be put into different positions. The collector grade figures tend to be larger and more detailed. Two notable examples include the NECA series, which are adult-oriented action figures, and the Aliens vs. Predator Movie Masters collection from Hot Toys, which are statues. Some action figures include:

What movies and movie-based collectibles are available?

You can find DVDs, Blu-rays, and digital copies of all movies in this universe as well as movie-licensed action figures, comic books, and novelizations. These items are inspired by:

What collectible AVP games are available?

There have been dozens of games released over the years based on this universe. Many have focused exclusively on "Alien" or "Predator," but there also have been many crossovers. One is the Aliens vs. Predator video game series, which introduced the concept of a Praetorian to the universe. Praetorians are an alien-predator hybrid. Beyond PC and console games, other options include:

Has AVP crossed over with other properties?

Yes. Both of these properties have crossed over with other universes together and in a stand-alone fashion. These crossovers are generally considered out-of-universe and thus do not make up the core mythology. Many items based on these crossovers include: