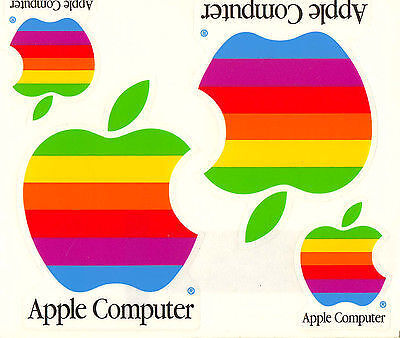 Proclaiming that you were an owner of an Apple Mac computer, before the invention of MacBooks, was a huge part of the 1980s. People proudly displayed decals on their car windows as well as on laptops and later, MacBooks. The logotype is seen as a symbol of pride to those who own Apple products, such as laptops or MacBooks.

Who designed the original Apple symbol, now a decal?

The rainbow logotype was designed for Mac in 1977 by Ron Janoff. At the time, it was the only one that was submitted to Steve Jobs and was given approval after two weeks of creation. Promoted through Mac decals and stickers, it was in use from 1977 to 1998.

Some of the vintage promotion and decals that use the symbol include:

What is the meaning of the vintage stickers rainbow design?

The vibrant rainbow colors were chosen to make the apple look user-friendly to school children and promote Apple products to young people through the happy and bright colors of the decal. Later decals became a monochrome color, after becoming a translucent blue in 1998.

What does the blue and white vintage sticker mean?

Vintage stickers that shows a blue and white iMac were printed in celebration of the revolutionary iMac computer, with its many-colored cases, invented before MacBooks. The iMac, with its colorful plastic casing, was introduced in May of 1998. This unique machine was a symbol of the return of Steve Jobs to Apple. Some Mac stickers have the following sayings:

What are the sizes of the Apple vintage stickers?

Stickers and decals can be found in a range of sizes, many of which fit on MacBooks. Both large and small versions were printed during the 1980s. The bumper sticker was part of the launch of the Macintosh 128 in 1984. Some sizes include:

Why are some of the old Apple decals seen on MacBooks?

Since it was first invented by Apple in 1989, the laptop was the first portable computer. It was much heavier, with a weight of 16 lbs. Later MacBooks and laptops were designed that were lighter and more portable. Owners of the MacBook Pro like to add a bit of history to their MacBooks Pro by putting the vintage sticker on the top of the case and declaring their position as an Apple pro.