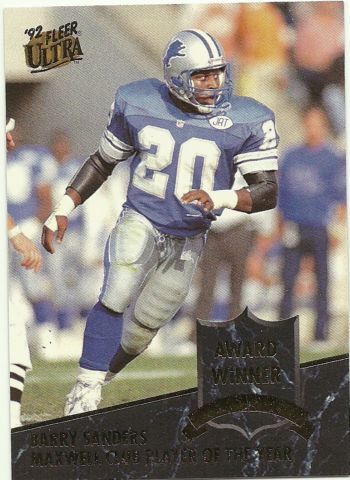 Barry Sanders was a professional rushing back who was one of the most promising and successful football players of the 1990s. Sanders played football for the Detroit Lions from 1989-1998 and set a variety of college and professional records. Mint trading cards of this Lions player are often sought by fans and those who followed his college and high school careers.

Who is Barry Sanders?

Barry Sanders was born in Wichita, Kansas, and was a rushing back who first made a name as a player at Wichita North High School, and later at Oklahoma State. During his time at this college, he set 34 NCAA records, such as the single-season rushing records in 1988 with 2,628 yards. Barry also won the Heisman Trophy. His career at this school made him a highly sought after running back who was drafted by the NFL team, the Detroit Lions.

During his time with this team, he rushed for 15,269 yards and has the third-highest amount of yards of any running back. He averaged five yards per each carry and scored 99 total touchdowns. In all of his professional seasons, he had 1,100 or more yards, tying a record with yard leader Walter Payton. He was the third player to rush for over 2,000 yards in a single season. Barry Sanders was also selected to the All-Pro team multiple times.

His time with the Detroit Lions came to an end when he unexpectedly retired in 1998. During his 10-year season, the Lions had a 78-80 record.

Sanders was able to walk away from football in the prime of his life and suffers from few physical or mental problems. Barry Sanders has also avoided excessive spending and has a net worth of $28 million.

These reasons indicate why cards of Barry Sanders remain active on the collecting market. As a player with a long career of 10 seasons, many cards are traded every year. Many of these cards were produced by Topps and include game scores and other information on this Lions player.

What Barry Sanders cards are available?

There are many Barry Sanders football trading cards that you can add to your NFL collection. For example, the NFL worked with Oscar Mayer in 1989 to produce an odd rookie football card for Sanders. It is a rare card because it was produced in a small set. Topps and Pro Set produced an official mint football card for his rookie year in 1989.

Other mint cards available for football fans include the 1990 Pro Set Barry Sanders Hawaii trade show promo. He autographed these cards and there are estimated to be only about 500 of these mint sports items available. More common Topps NFL sports items showcase Barry Sanders and display all the scores and his NFL net worth.

Content provided for informational purposes only. eBay is not affiliated with or endorsed by Barry Sanders.