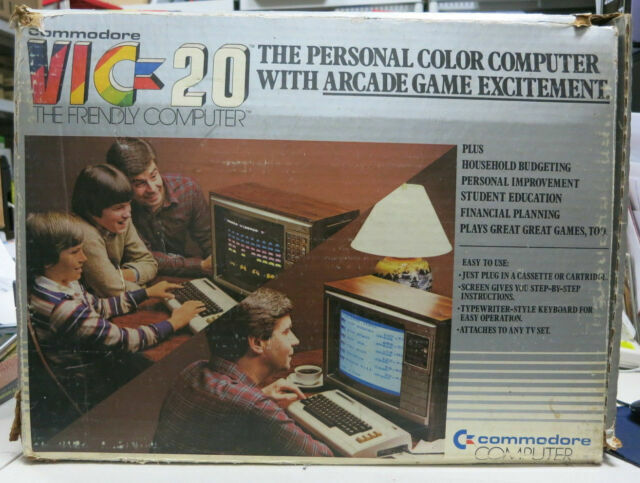 The Commodore VIC-20 is a home computer that Commodore first produced in 1980. It was the first computer to sell over 1 million copies, and it used a cartridge system to upload games and software.

What kind of ports and sockets are available?

The Commodore VIC-20 possess a variety of proprietary connectors that allow users to add multiple expansion cartridges. These ports allow users to supplement a tape drive, known as the Datassette, to expand its power and capability.

Because of this, the Commodore possessese limited memory. For example, it houses 5KB of RAM, and about 1.5KB of this RAM is used to control the video display and the BASIC interpreter. As a result, the ports and sockets expand the range of this machines use. They add extra memory and make it possible to run more complex programs. Many of these expansion products are available.

What operating system does the VIC-20 use?

The Commodore uses a system known as KERNAL to operate. It is a text-based system that requires inputting a variety of commands with the keyboard. It differs from MS-DOS and other operating systems because it runs BASIC and allows users to program their games and software. As a result, there are many programs created over the years that work with this operating system.

In fact, games and programs are still created for the Commodore VIC-20. These fan-made games use the same cartridges that were used in the initial applications. As a result, those who own this computer can run these games or even adjust the programming.

What graphics are available on this computer?

The VIC-20 is capable of 16-color capability. The display is able to show up to 27 different columns of characters based on characters made from 8 pixels by 8 pixels. It is possible to run up to 256 different characters at once. Programmers interested in the VIC-20 need to create their own custom set of characters rather than relying on a bitmap mode.

What sound is available on this model?

Programmers interested in the VIC-20 have access to the VIC chip. This component used three pulse-wave sound generators to create a variety of tones. Each of these generators has three octaves of sound that, when combined, produce a total of five octaves. A white noise generator allows programmers to create harsher tones for their games and programs. However, all output is in mono and is run at the same volume level. As a result, a careful balance between tones is required.

Content provided for informational purposes only. eBay is not affiliated with or endorsed by Commodore.