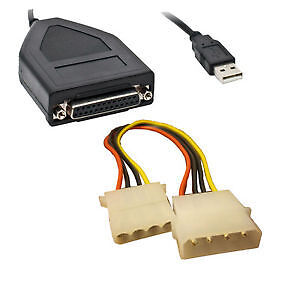 Parallel IEEE 1284 female to USB type A male cables allow you to connect many types of devices like printers, scanners, tape drives, and hard disks to your computer with one cable solution. These female-to-male connector cables are unbranded and may come in a variety of colors, lengths, and styles. This adapter cable will be compatible with any computer with a USB port that accepts a male plug.

What does parallel mean?

IEEE 1284 is the standard nomenclature for bi-directional parallel communication for your computer and another device that is connected to your computer. Originally, this term was developed by American printer manufacturer Centronics in the 1970s. In fact, this type of port is sometimes known as the Centronics connector port. This type of connector port allows for bi-directional information to go into and out of a computer or a device. The maximum flow of data through one of these connector ports is typically about four megabytes per second.

The IEEE 1284 can operate under five different connector modes. Listed below are the various types of modes and a brief description of each mode when the connector or adapter is active. Note that these modes will all be possible with the Parallel IEEE 1284 female to USB type A male cable.